Thank you for your patience while we retrieve your images.


Like the second coming of roses in the garden, a repeat visit to David Austin’s Garden and Nursery is always pleasurable. However this year it was nothing short of sensational. In a rare, informal interview in the gardens with David Austin Senior, he confessed ‘It’s certainly one of the best years ever’ for his roses. The nursery gardens were drenched in perfume. So voluptuous was the flowering in June that you had to squeeze down the pathways and duck beneath the dripping pergolas. The profuse flowering was a combination of early blooming roses held back by spring’s cold snap combined with the flowering of mid-season roses.
Not only are there new introductions of the quintessential repeat flowering, perfumed’ English Roses ‘Desdemona’, ‘The Ancient Mariner’ and ‘Sir Walter Scott’, but also David Austin has hit upon a perpetual summer flowering rose - Rosa ‘Olivia’, a 2014/15 introduction which blooms whilst simultaneously in bud throughout the summer. It has unbroken flowering, rather than a second flush.
The versatility of David Austin’s roses is demonstrated throughout the gardens; some shrub roses do as well as climbing roses, scaling walls and draped over obelisks. Single, double and triple rose specimens are planted in enormous terracotta pots, proudly puffed out in their second or third season. Shorter compact shrub roses offer wall to wall flowers filling in box beds and roses smother north facing walls. The gardens at David Austin demonstrate both the wonderful diversity of roses colour, form, fragrance and habit but also their versatility in the garden. It’s a stunning garden to visit in peak season and you come away enthused and bursting with ideas for your own garden. 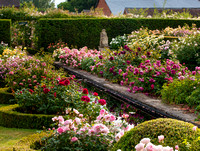